Jesus’ response to the death of his friend Lazarus not only teaches us about the character of God, but what to look for and pray for when interacting with people about Jesus Christ.

Jesus was challenged three times by the mourners over the fact that he wasn’t there in time to prevent Lazarus from dying. By Martha, Mary, and the other Jews. Of course in His greatness – God had another plan. (John 11)

To the three inquiries he made three different responses:

2 – a response of emotion – He was deeply moved. This was possibly a powerful stirring of God’s heart at being doubted (rather than a sorrowful response over a death. After all, he was about to raise Lazarus!).

3 – a response of amazing action – Jesus resurrected Lazarus after four days in a tomb!

So I have a new prayer and hope for our radio broadcasts all over the world, and for my own encounters with people everywhere: that they would experience God’s truth, heart, and activity in their lives. 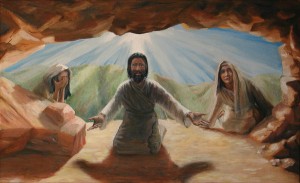