Many of my readers know that I have a special connection with Jordan. I lived there between 1997 and 2007, and I survived … the roads and the heat!  But today I’m feeling especially thrilled by some awesome news that revives my Jordanian connection, thanks to FEBC Korea.

Dr Billy Kim, the Chairman of FEBC South Korea, recently led a delegation to Israel and Jordan to visit the special Biblical sites. They were diverted to a Syrian refugee camp in the north of Jordan where Dr Kim and his friends were confronted with the plight of thousands of refugees. The FEBC Korea staff promptly aired a three day Radiothon to raise funds for shelters and blankets. Listeners sold jewellery, redeemed life insurance policies, and gave generously. Another large Korean broadcasting company was inspired to join in, and enough was raised to supply over 2000 shelters and 1000 blankets (so far).

As if that isn’t awesome enough, the impact on the Korean ambassador to Jordan was eternal!  Shin Hyun-suk was so inspired by what Korean Christians were willing to do for people on the other side of the world, that he accepted Jesus Christ as his savior. Dr Billy Kim then had the privilege of baptising him – of all places – in the Jordan river. 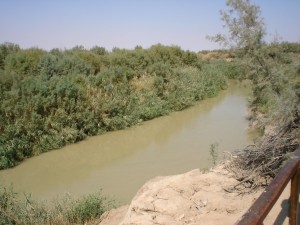 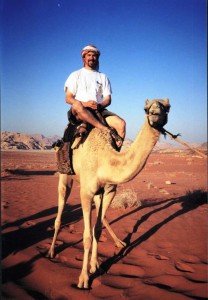 Matt on a racing camel ! The Jordanian desert is beautiful, and harsh.