A friend recently told me her radio “is only ever tuned to Radio New Zealand National.” That’s  impressive. Or is it?

Don’t get me wrong, I love commercial free intelligent radio, and real news that lasts longer than a sentence per story. But the world has moved on. 15 years ago, that may have been a good way to stay on top of events, but today the whole world has shifted to news, so holding on to one delivery channel is very simplistic.

In the 1950s radio became the mass media after the arrival of the transistor radio. The “wireless” could reach across oceans and continents and deliver a huge variety of content. And it did: news, drama, stories, music, religion.

Today, thanks to new media, everyone’s a journalist and anyone can deliver news and pictures to everyone. Check out these protesters in Tahrir Square. The latest info was brought to us by citizen journalists (pic right, by Muhammad Abed/AFP) 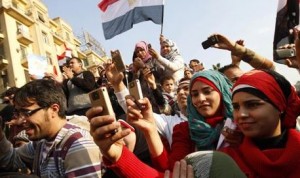 So, I offer two observations about this media shift:

1. Creative “edgy” programmes have all but disappeared from the global broadcasters and gone to the teenagers on the streets.

2. The enormous number of new media information channels means we need to surf around to specialty media to see and hear comedy, drama, religion, opinion, analysis, and a variety of news coverage.

I don’t think you can consider yourself well informed if you only listen to one radio station. What do you think?