WOW – apparently the acronym OMG (O! My God) has been around since 1917, but I suggest it’s a lot older than that.

Its first recorded use was in a letter from Lord John Fisher to Winston Churchill, apparently he was excited to be considered for a new knighthood. OMG joined FYI (For Your Information) and LOL (Laughing Out Loud) as officially recognised terms in a recent online version of the Oxford English Dictionary.

Isn’t it great when terms capture and sum up wonderful truths? Believe it or not, all three of these are ancient and powerful biblical concepts that appear throughout scripture, and in the case of OMG it is word for word!:

FYI is a driving thought in the Apostle Paul’s ministry as he sought to “fearlessly inform of the mystery of the Good News… pray that I may inform of it fearlessly.” Eph. 6:19-20

LOL is the response of a delighted Sovereign God, and a thrilled people.  When the nations plot against God – He laughs out loud (Psa. 2:4; 37:13). And for people who weep today at the brokenness of the world, Jesus promises there will be laughing out loud (Luke 6:21). 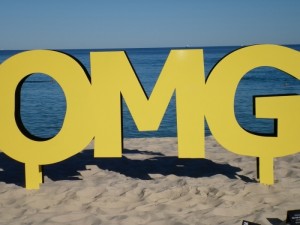 The most ancient acronym