I love the way faithful people in the Bible give us amazing insights into what God requires and deserves. In the first Christmas story we get a very powerful lesson in this from the two different responses of Mary, and Zechariah.

When Zechariah was faced with the angel Gabriel and the incredible news that Elizabeth would have a baby, and then Mary was similarly confronted with the same wonderful news, their responses reveal unbelief and faith respectively. This is a regular human issue, so thinking about what we do when faced with the voice of God, is worthwhile.

Zechariah’s words betrayed his unbelief “How can I be sure of this?” (Luke 1:18). His focus was on himself, and his attitude was obvious – you owe me assurance.

Mary, on the other hand, said these most faithful words “I am the Lord’s servant, may it be to me as you have said.” In spite of all the hardships she was about to face (a pregnant unmarried girl in the Middle East in the first century!) she had faith, and spoke it out with courage.

Elsewhere in the Bible, the apostle Paul says that God gives grace to the humble, but opposes the proud. Although it might seem harsh, this is the reality for Mary and Zechariah. Her humility and faith opened the way for blessing for all the world.

Zechariah’s unbelief meant God’s plans went ahead, but he faced a season of suffering. But as usual, there was grace from God, and Zechariah was restored as he exercised new found faith at the naming of John, and his speech returned.

Mary’s words are a great prayer. This is what I want to say with integrity and honesty always. This is my New Year’s resolution 🙂  This is what we long for among our listeners everywhere around the world. For the young men and women in Indonesia, Vietnam, China, Ukraine… when they hear the incredible Good News on the radio, or wherever, may their genuine response be these same words.

For many, it already is. Be encouraged. 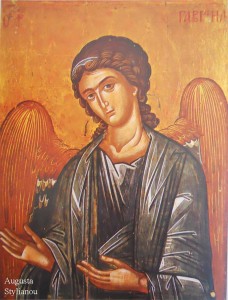